About the traditional Chinese calendar

Documents/ About the traditional Chinese calendar

Theoretical foundations of the Chinese calendar 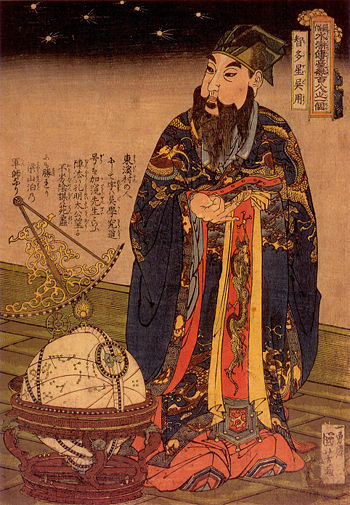 The Taoist theory of Qi, Yin Yang, 5 Elements and 6 Energies sets out the laws and dynamic characteristics of the fundamental creative energy. This energy exerts varying influences on the entire creation according to three fundamental vectors: time, space and the ground. These three vectors have led the ancient Taoists to establish the concepts of "Constant" and “Changeable". This was by observing the heavenly phenomena and identifying them in nature, our phenomenal world and the manifestations of the "invariable" and the "variable” cycles.

Our complete energies calendar calculates all these cycles. The invariable cycles allow, as in all calendars, to know the days, months (lunar, solar, Gregorian), the seasons (equinoxes and solstices), the regular energetic cycles and their different phases “invariably” animating our environment (such as the Wood Movement energy in spring, which returns each year). But the variable energies, called “Guest" energies, do not recur each year in the same manner. Their cycles, which extend over periods that exceed the year itself, “invite themselves" during the normal course of ("invariable”) events and often they even take the lead. The irregular “Guest" energy cannot prevent the spring from returning each year, but it does decide if it will be cold, windy or rainy!

1- Information that allow to measures time.

As for all real calendars, the Chinese calendar makes it possible to situate a period in a precise chronology through the dating system. Dating is mainly constructed upon regular time units produced by natural astronomical phenomena. The year is related to the time that the Earth takes to do one revolution around the Sun, or even to a certain number of lunar months. The month was initially related to the lunar phases, readily observable, then later also defined as a segment of a twelfth of the solar ecliptic. The day is of course linked to the time that the earth takes to do one full rotation on itself. Men also needed to enumerate the shortest time units fairly quickly and the system of division of the days into hours, minutes seconds and even smaller units was devised in China as in other cultures since the most ancient times.
Through dating, we can determine for example the date of birth, the age we have and when a certain event occurred or will occur.

2- Information on the current energies.

The ancient Chinese who established the foundations of the calendar didn’t do this just to develop a practical dating system. Their intention was mainly to determine the energies in activity throughout the passage of time. According to them, all natural phenomena are derived from the activity of fundamental forces which direct the emergence, the manifestations and the transformations.
Looking at both nature as a whole and at its smallest creations, they come within the immutable principles governing all manifestations. Defining these principles according to the Taoist concepts, they integrate them into a more extensive philosophical overview, thus unifying the notions of emptiness and non-being with those of production, manifestation and transformation. These principles governing phenomena were called The Laws of the Tao. These laws establish the notions of Yin, Yang, 5 Movements and 6 Energies. But also of generation, production, transformation and recurrence.
The stellar phenomena and the heavenly bodies are all phenomena produced by the activity of fundamental energies. They also condense the properties, just as the Sun, the Earth and the Moon, and are thus also active agents of these energies. Their revolutions and positions are thus used to define their cycles of influence on Man and on his environment.