Energy cycles and their influences

Documents/ Energy cycles and their influences

TE 德,or virtue of the TAO 道, is the source of the original undifferentiated energy QI 氣, derived from the Supreme Emptiness or WU JI 無極.This energy is polarized into two opposing dynamic tendencies, that of movement and that of stabilization, a mutation that is represented by the Taï Ji Taï Ji 太極 symbol. Movement produces change and transformation. Stabilization produces the form and the apparent manifestation. They are also called dynamic energy and energy of resistance and often more simply, energy and matter, activity and inertia, Yang and Yin.
The definitions of the 5 Yang Movements (and also the 5 dynamisms and the 5 elements) and the 6 Yin Energies are derived from their properties and the particular relationships that these two forces maintain.

Extending in space, the original Yin and Yang are generated, like the waves created by a stone thrown into water, from multiple energy fields, in which they spread out their activities. Here are those described in our calendar, with their astronomical referents and their fields of influence. 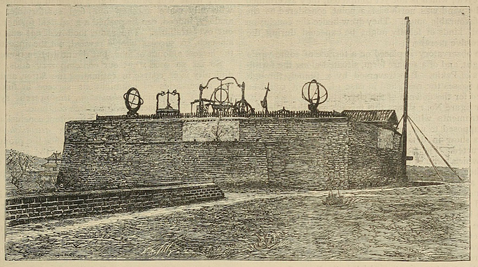 The energies that govern the year:

Each year the sun moves through a different sector of the galaxy and meets the 5 Movements of the cosmic Yang, which fills space. This cycle extends over 10 solar years with each movement being active for 2 years. The energy of each Movement is thus the essential dynamic influence throughout the year in Man’s environment, this in its broadest sense, since it includes the solar system! However, within its field, it does nevertheless exert its dynamic influence as far as the smallest of things.

2- The cycle of the Master of Heaven Energy and the At the source Energy.

Observed from the Earth and in the Northern hemisphere, the Sky appears to have the Pole Star as its fixed point, namely Alpha Ursa Minoris of the Little Bear. Before the year 1000, and for thousands of years in China as in Egypt, the Alpha of the Draco constellation held this place.
The heavenly sphere appears as a hemisphere in rotation around a central axis. The pole star is situated on this axis, which thus makes it possible to localize. Throughout the year, the constellations close to Earth appear to be rising from the North-East horizon towards the ‘heights’ of the sky to the South and then descend again towards the North-West horizon, ‘low’ in the sky to the North. This rotation of constellations is related to a Yin cycle of cosmic energy, whose six phases spread out over a period of 12 years.
Due to the variation between the axis of the Sky and that of the Earth (or more simply between the solar ecliptic and the Earth equatorial plane), from the viewpoint of an observer in the Northern hemisphere, the equatorial horizon of the Earth appears to be moving towards the ‘heights’ of the Sky for half the year, then to be moving towards the ‘lower’ part of the Sky during the second half. During the first 6 months of the year, the sky above the observer is under the influence of the energy in place ‘on high’, called the Master of Heaven Energy. Then, during the last 6 months, the visible sky is under the influence of the opposing and complementary energy in place ‘below’, called the At the Source Energy.

The ancient Chinese also observed which dominant dynamic energy appeared to be active, generating regular transformations throughout the solar year, in things, matter and in Yin. They determined that the 5 Movements of the Yang energy dominated, one after the other, over a period of 10 years.
As for the Central Movement, each Movement dominates for two consecutive years, but the years and the Movements are paired differently. The Yang energy is of a non-material heavenly origin and this ten year cycle is called the Ten Heavenly Stems.

Subsequently, looking at the nearby sky, that of the climatic phenomena, the ancients distinguished 6 types of regular manifestations linked to the 6 Yin energies. These 6 Energies exert their influences over a period of twelve years, according to a specific sequence. With the Yin energy here being of an earthly origin, this 12 year cycle is called the 12 Earthly Branches.
It should be noted that every 60 years, after 6 cycles of 10 Stems and 5 cycles of 12 Branches, we find the same Stem/Branch combination.
The energies of the 10 annual Yang Stems and the 12 annual Earthly Yin Branches are largely dominated and modified by those irregular Energies of the Central, Master of Heaven and At the Source Movements.

The energies which govern the seasons:

From year to year, the ancient Taoists noticed that the 5 Yang dynamisms dominated in turn throughout each year, following maxima and minima periods of sunlight. They called this yang cycle the regular 5 Seasonal Master Movements and divided the year of 360 solar days into 5 periods of 72 degrees each. In the temperate regions, in particular, these 5 dynamisms share the year harmoniously.

As for the solar yang, the earthly yin energy also has a regular, seasonal cycle called the regular 6 Seasonal Master Energies. Considered as the ‘response’ of the Ground to the annual solar Yang cycle (the Sky provides the impulse, the Ground reacts), this cycle consists of 6 periods obtained by the division of the solar year, that is, 60 solar days for each energy.
These two cycles correspond to the seasons. Like them, they reflect the regular manifestations of the Yin-Yang energy during the year. Every year, after winter, the days lengthen and spring arrives. The same is true for the Yin-Yang seasonal energies of the Sun and the Earth, their cycles unfold their phases throughout the year. At the beginning of each year, the sunlight increases and the rising solar Yang exerts its influence. However, if there is a marked warming up and setting in motion every spring, these manifestations occur more or less early and with more or less power. And so on for each season. For the ancient Taoists, these variations in the regular climatic manifestations are mainly caused by two other cycles of energies: The cycles of the Seasonal Guest Movements and the Seasonal Guest Energies.

The 5 Guest Movements are generated by the Central Movement. Although this is the major dynamism of the year, it follows the general laws of energy. This means that its own activity forces it to transform following a cycle, and thus generating the other Movements of a complete Yang cycle.
As they are not regular seasonal Movements (like the 4 seasons or the 5 Master Movements), they are called the 5 Guest Movements. But this term of Guest must not lead to an error over their influence. As a Guest, they fully exert their properties and largely direct the events in their periods. They are the Guest dynamisms in the seasons.

The 6 Guest Energies are derived from the cycle of the annual Master of Heaven Energy and At the Source Energy.
As for the Guest Movements, the Guest Energies modify the regular seasonal expressions of the 6 Master Energies, which mainly manifest through climatic variations that are more or less ‘normal’ during each season.

The energies which govern the months:

The Sun and the Earth, the Heavenly Yang and Earthly Yin, are the sources of a cycle associating their energies according to a monthly frequency. These periods are called the solar months as the time of influence of each one is equal to 30 degrees of the solar ecliptic.
After 60 Stem/Branch pairs (60 = 6 times the 10 Stems and 5 times the 12 branches), the same combinations return. Therefore, this cycle starts again every 5 solar years sui 歲.
Dominated by the seasonal Guest Movements and the seasonal Guest Energies, they do however change the influence during their monthly periods.

The lunar phases are very practical for their visibility and regularity. However, all the lunations are not of equal duration and the total number of lunar days and months included in a solar year is not constant from one year to another. So that the major events of the lunar and solar calendars retain their consistency, for the indication of the beginning of the year, the seasons or the relationships between the energetic cycles, some lunar years include 13 lunations. This makes it possible to adjust the cycle of the moons to that of the sun.
As for the cycles of the seasonal Master Movements and the seasonal Master Energies, the annual lunar cycle is associated with a regular energetic cycle, defined by the observation of the active energy ‘at the Center’ throughout the year. As for the other Yin cycles including 12 phases or periods, that of the annual moons refers to 12 symbolic animals and though we say either “first moon", or “tiger moon” in Chinese, it should however be noted that we do not use the name of the 12 Branches.

The 12 animals/symbols of the “Yellow Road"

The 12 lunar months (or 13 months) are thus associated with the 5 ‘agents’ in a specific way. As for the seasons and the other so-called regular, constant or ‘immutable’ cycles, this cycle is however under the influence of the irregular cycles and, in particular, of the monthly Stems and Branches. 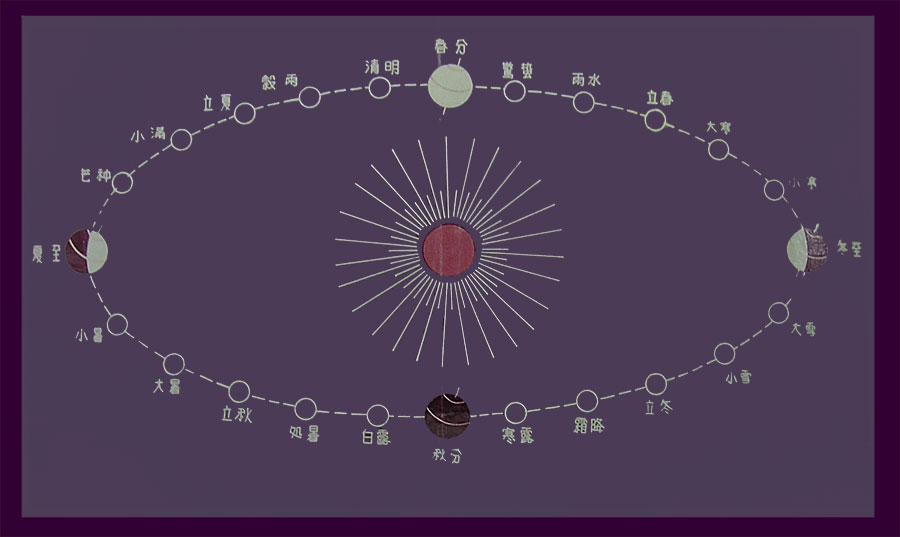 As for the moons, the solar months are also used to establish a regular calendar called the 24 solar Stations or Terms, associating the solar year with the main events manifested by nature. The 12 solar months each include 2 Solar Terms, the solar year of 360 degrees being divided into 24 segments (so called solar terms) of 15 degrees. More precise than the lunar calendar, this calendar takes into account the solstices, equinoxes and seasons and was used for a long time as an almanac of the agricultural work calendar.
As for the lunar months, the 24 Solar Terms are particularly used as an annual clock and almanach, they do not have any significant influence on the energies of the months.

The energies which govern the days:

12- The daily Stems and Branches.

The days are also under the influence of yin and yang, each being associated with one of the 5 Movements and one of the 6 Energies. They are called the daily Stems and Branches. Governing the energies of the days, they change the influences of the monthly energies.