Yin and Yang, Movements and Energies

Yin is one of the two manifestations of the original creative energy, represented by the symbol TAI JI 太極. This is the tenuous matter whose aggregations form the visible matter, the ‘things’.
Its characteristics and properties are the solid, liquid or gaseous states, the form, inertia, slowing down, resistance to change, concentration, divisibility and multiplicity.

Yang is the other evident manifestation of the original creative energy. This is a dynamism which means that the universe is in constant transformation. It is an energy that is responsible for changes, mutations and movements.
Its characteristics and properties are insubstantiality, movement, acceleration, modification, expansion, unity and indivisibility. Its action is only visible through the transformations that it induces in things, in the Yin.

The Yang energy acts in accordance with 5 dynamisms, evidenced in the major transformations visible in nature. The emergence of a phenomenon, its development, its maturity, its decrease followed by its disappearance are evidence of yang activity. The 5 Movements, sometimes also called 5 phases, 5 dynamisms, 5 elements (五行 wŭ xíng) or 5 agents, form the yang energy cycle. They are the dynamisms inducing the movements, the transformations, the changes and the mutations in all things. Their names symbolize these dynamisms; they are Wood (木 Mu), Fire (火 Huo), Earth (土 Du), Metal (金 Jin) and Water (水 Shui).

Nature of the 5 Movements:

The names of the 5 Movements symbolize the nature of the dynamisms that they represent.
Wood is the instigator, the stimulating, flexibility and growth. Fire is propagation and development. Earth is maturation and production. Metal is slowing down, diminishing and hardening. Water is immobilization, stopping and conservation.

The relationships between the 5 Movements are of generation-engendering (生 shēng) and of control-regulation in the natural order (剋 ke), of rebellion (叛 wu) and oppression (壓 xiang) in the irregular relationships.

The 5 Movements are always present together, as well as Yin and Yang, but their interactions vary depending on the dominant energy in place. When the energy of one of the Movements is at its peak, those of the four others are under its influence to varying degrees, which determines the particular relationships between the Movements. These relationships are of mutual engendering and control (regulation) when the energy is balanced, of rebellion and oppression when the normal relationships have broken down.

Although, on this subject the terms "cycles" are used to explain these possible relationships between the energies of the Movements, it is however necessary to understand that the only cycles really in activity concerning the fundamental nature of the universe are those of engendering and control. The cycles referred to as oppression and rebellion are used to define the local, environmental, biological or human disturbances. These disturbances have two possible origins: a configuration of the current natural cycles forming a combination particularly contrary to the balance of energies of a specific environment (such as storms or dryness), or the intervention of a factor exterior to the natural cycles (such as deforestation or incorrect diet). The notions of cycles of rebellion, of defiance or of revolt belong, in particular, to medical terminology.

The cycle of control (剋 ke) becomes the cycle of oppression (壓 xiang) when the dominant energy exerts too much pressure on the energy of the Movement which it regulates. Using analogies which provide symbolic names for the Movements, we say that Wood limits Earth by its growth but depletes and suffocates it, if overly abundant, covering it too much. Fire warms Metal, thus limiting its power of contraction, but melts and disperses it, if it is too powerful. Earth limits Water by absorbing it and channeling it, but it may also obstruct and contain it, preventing its flow. Metal controls Wood by slowing it down, but it can also split it when it contracts too much. Finally, Water limits the power of warming-up and the propagation of Fire but it may also suffocate, drown and put it out.

Yin is solid matter, but from the energy perspective it is not totally inert. Subject to the dynamic Yang influence, it has different states, not only of its form but also of heat and coldness, dryness and dampness. These different states give it the particular properties called the 6 Energies. The 6 Energies are the Absolute Yin (Jue Yin 厥阴), the Lesser Yin (Shao Yin 少阴), the Lesser Yang (Shao Yang 少阳), the Greater Yin (Tai Yin 太阴), the Bright Yang (Yang Ming 阳明) and the Greater Yang (Tai Yang 太阳). These 6 Energies of the Yin cycle produce the visible climatic manifestations in the Yang domain, the Sky. They are Wind, Heat, Fire (heat wave), Dampness, Dryness and Cold.

In contrast to the 5 Movements, the 6 Energies do not generate each other. They are the response of the Yin from the ground, to the influx of the 5 Yang heavenly Movements. Their cycle is therefore linked to that of the 5 Movements.

Nature of the 6 Energies 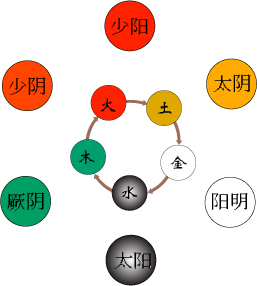 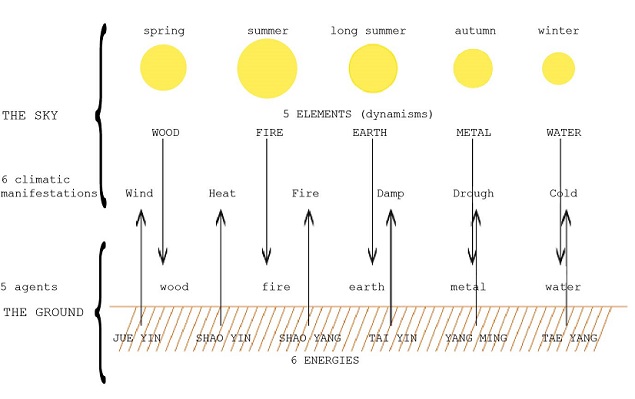 Another example of Yin properties and matter, here with a tree. The tree receives Yang energy from the sun. Initially, it absorbs the radiation and the heat from above and freshens the space under its foliage, not only from the shade it makes but also because for a long time its own temperature remains lower than that of the surrounding air which warms up rapidly. In the afternoon, while the sun radiation loses its intensity, the tree then gives back the stored heat. The Yang energy of the sun modifies the Yin structure (here for the tree, to make it grow or deteriorate is to say that it has changed its form). But the Yin energy of the tree also modifies that of the surrounding space, being insubstantial and the domain of Yang it transforms the dynamic. 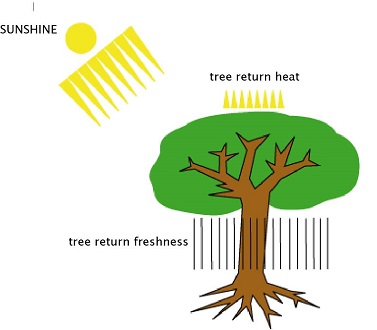 Some cycles of the yang energy spread out in 10 phases over 10 days, 10 months or 10 years. We thus call these time units associated with the 5 Movements the Heavenly Stems. They are comparable to a circular stairway where each ‘step’ includes two periods. First, we advance with the left foot, this being the yang aspect of the step, then we place the right foot next to the left foot, this being the yin aspect of the step. We can also understand this as being the beginning or the end of a movement, or even its growth or its decline. In order, the Stems are Jia 甲, Yi 乙, Bing 丙, Ding 丁, Wu 戊, Ji 己, Geng 庚, Xin 辛, Ren 壬, Gui 癸.

The 5 Movements in 10 phases form the Heavenly Stems 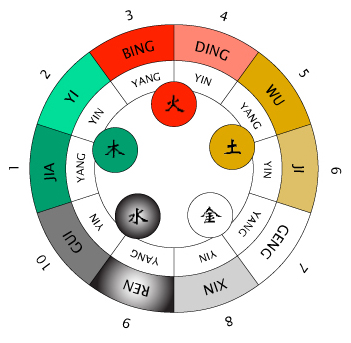 Some cycles of yin energy spread out over 12 hours, 12 days, 12 months or 12 years. We thus call these time units associated with the 6 Energies the Earthly Branches. As for the Stems, the Branches are broken down into yin or yang ‘steps’. By looking at the diagram, we can see that the 12 Branches do not appear to follow the same engendering cycle as that of the 6 Energies. The explanation is as follows: Throughout the years, months and days, the yang cycles of the 5 Movements and the 6 Energies spread out. For the yang cycle, we see where the energy comes from and its nature, it’s the cycle of the 5 Movements, and the dynamism that it brings about ‘in the center’, which forms the cycle in 10 Stems. For the yin cycle, we see the different types of manifestations in the Sky, it’s the cycle of the 6 Energies.
The cycle of the 12 Branches reflects the energy which dominates ‘in the Center’ during which the cycle of the 6 Energies manifests ‘in the Sky’. To establish this cycle we take into account both the cycle of the 6 Energies in place ‘in the Sky’ and the transformation of these 6 energies, in the Center, in one of the yang Movements. In fact, yin and yang complement and influence each other, and even mutate from one to the other, each of the 6 Energies is thus able to transform into a Movement. The Branches are thus defined both as belonging to one of the 6 Energies and by the transformation of energy in the Center in Movement.
For example, during the second Branch, Chou, although it is in the Sky at the time of the Tai Yang energy, the dominant energy in the center is however Tai Yin, of which the transformation in Movement is Yin Earth. The Yin Branch, the period during which Jue yin is in the Sky, has a transformation into Yang Wood. Mao, the fourth branch, has a transformation into Yin Wood. Then once again, during the Chen Branch, while Chao Yin is in place in the Sky, the dominant energy in the Center is Tai Yin, with a transformation into Yang Earth. It can thus be observed that the Tai Yin energy is present, with its transformation to the Earth Movement, during four phases, or Branches of the cycle. This is due to regular fluctuations in the intensity of the energy of the Movements and the Energies. When the influence of the Sky and a Movement is weakening, and before the next one is strong enough, the essential yin energy, Tai Yin, dominates in the Center, which happens every two hours (Chinese hours), 2 days, 2 months and 2 years. In order, the branches are Zi 子, Chou 丑, Yin 寅, Mao 卯, Chen 辰, Si 巳, Wu 午, Wei 未, Shen 申, You 酉, Xu 戌, Hai 亥.

The 6 Energies form the cycle of the 12 Earthly Branches. 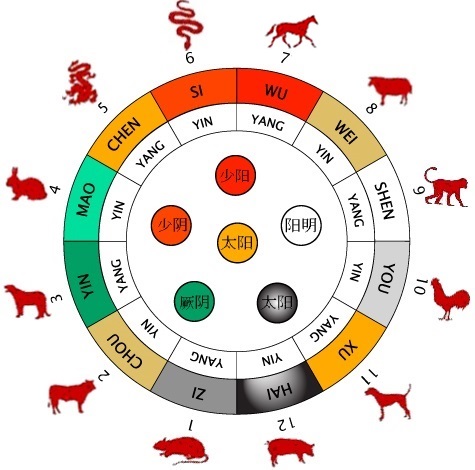 If we say to a Chinese person “I always get up at the time of mao 卯", he would understand at the time of the Hare. However, you must know that "mao" does not mean lark in Chinese. The twelve terms zi, chou, yin, mao, etc.., are the names of the twelve branches. However, the practice of representing the 12 Branches by animals symbolizing the energies of the cycle is so ancient that for many years few people knew the difference. Moreover today, even fewer people know that the twelve Branches are derived from the yin cycle of the six energies. These are their transformations into yin or yang Movement.